So, last night +Mark Diaz Truman came back on the show to talk about his Patreon project, The Fate Codex. As usual, he was amazing and energetic as we talked about the following: his project, the difference between Kickstarter and Pateron, all of the amazing people involved with Fate, Star Wars, and The Firefly Rpg.

In thios episode i talk with +Ryan M. Danks about a project he is/was working on. We also briefly discuss Jadepunk, though it was early on in the developement of it so we were a little vague.

Posted by Jacob Possin at 7:41 PM No comments:

Fate Points Episode 006: Off we go into the Wild Blue

I am aware that it has been a while since I put out an episode. I am sorry about that faithful listeners/viewers. Things were crazy there for a few months. Ok, like five months...sorry. Stacy's computer broke, and then I was working on Jadepunk, and all of that. However, good news! Here is the next audio podcast of the show. Brian Engard showed up to discuss Wild Blue, a setting for Fate Core. You can pick this setting up in a big book with four other settings/adventures, Fate Worlds Vol. 1: Worlds on Fire.

We had +David Hill on our show to discuss Apotheosis Drive X. When this show originally aired the kickstarter was still live and we talk about that quite a bit. Though that does date the show a little there is quite a lot of good material in this one. We end up getting into a lot of the nitty gritty of what makes this game shine. If you love fate but were a little leery of this project, have a listen and see if it is for you.
Posted by Jacob Possin at 12:20 AM No comments: 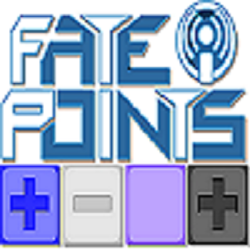 So, things are still rolling along here at Fate Points headquarters. Ok, we don't have a HQ, but it sounded cool, right?

So, the last few episodes have been good overall, but I personally have a few issues here at the home. First there was the interview with +Mike Olson. The interview went very well, but my mike kept giving feedback and I spent the last 45 minutes having to sit there and not be able to say anything (I did ask a few questions via chat that Jacob asked). I have not watched that video as of yet, as I am afraid I will just look pissed off the entire time. :)  I was really upset about it, but the interview went well.

Then last night we had +John Adamus on the show and it started out fine. Then my roommates started watching hockey and turned up the volume on the TV and I am sure you guys heard some of that. I am very sorry about that and eventually went upstairs to finish the remainder of the interview. I hope it did not look like a bad shake cam from a horror movie as I moved up the stairs. But John was a fabulous interview so it was all great in the end.

In two weeks on June 17th we will have +Andrew Goenner who currently has a Fate Kickstarter called Time Heroes. It deals with Saturday morning heroes and Fate! You can check it out here.  http://www.kickstarter.com/projects/geekworldonline/time-heroes-saturday-morning-cartoons-fate-style?ref=live

On July 1st, we will have +J.R. Blackwell on the show to talk about her work on the Fate Core Supplement Court/Ship. An alien invasion set in the Court of Louis XV.

On July 15th, we will have +Amanda Valentine on the show to talk about her work on various Evil Hat games, such as the Paranet Papers. Not to mention a ton of other things she has worked on. Oh and she is also working on Firefly!!

I am in the process of trying to get a few other people on the show and still want to get some of the big dogs from Evil Hat on the show.

Lastly, I have been toying with the idea of having an official Fate Point hangout game with some of our previous guests. I have not really approached any of them yet (except John Adamus), so that will be happening soon.